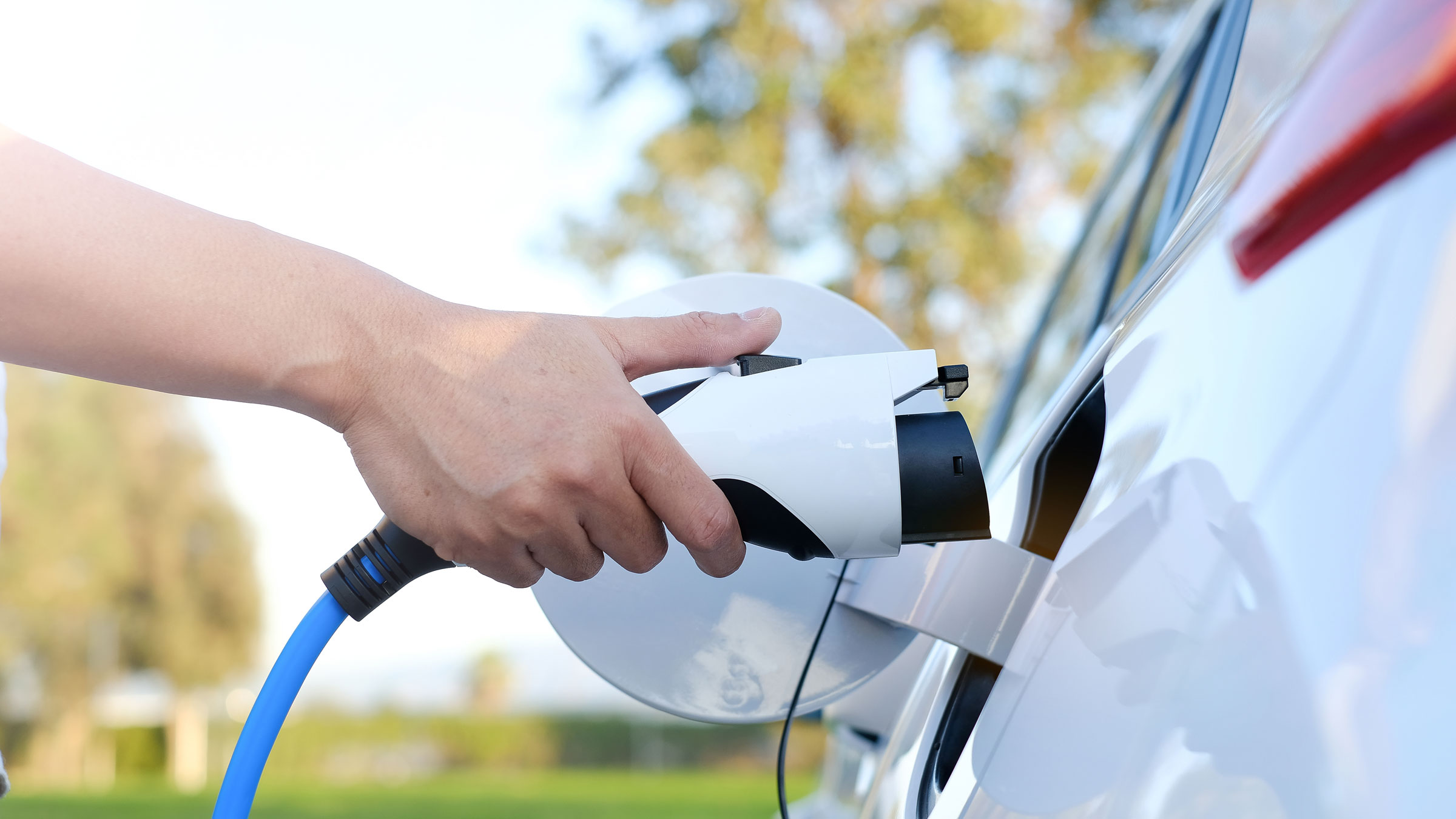 With more and more electric vehicles (EVs) on the road, the public is more aware of the potential consequences of fire starting within the rechargeable battery packs used to drive the car. The drivetrain in these EVs is powered by lithium-ion batteries, which have been known to catch fire in rare cases. These fires can occur due to a variety of reasons, such as damage to the battery, overheating, or charging issues.

Despite the many safety systems installed and the much better battery technologies now used, there are the horror stories of vehicles catching fire and the fire brigade having very few tools to stop the fire and keep from re-igniting.

Although these types of fires can occur, in actual fact, they are less common than the public may fear. However, importantly these EVs also still have regular 12-volt systems in the cars powered by the same type of batteries seen in traditional internal combustion engines. These systems are used to power all the ancillary devices such as heating, cabin electrical systems including navigation and in-car entertainment. And although still rare it is these systems are probably more likely to start a fire than within the large lithium batteries used purely for the drivetrain.

Therefore, it is important that owners of these EVs still carry a handheld fire extinguisher not only to aid them, and their families, escape from the vehicle but providing it is safe to do so, they can extinguish that fire in its early stages. This way they can possibly save the vehicle but hopefully, catch the fire early enough before it can spread leading to the drivetrain battery packs from catching fire and thereby leading to be a much greater danger to all concerned in the area.

If the complex drivetrain battery system is on fire, it is extremely important that everyone escapes to a safe distance well away from the fire.  Firstly there is a risk of toxic fumes from the battery cells, such as hydrogen fluoride and lithium oxide, which can be harmful to human health. Firefighters will wear special protective gear and respirators to protect themselves from these fumes. But also there is the possibility that there could be explosions from the burning vehicle which could endanger life.

Another consideration is that it is important that all drivers carry suitable handheld extinguishers so that, if come across a fire at its early stages, and again it is safe to do so, for example with another motorist or where ever they may be. They can assist to extinguish that fire, again potentially saving further escalation and possibly even life.

The Fire Safety Stick is a very useful handheld fire extinguisher to carry in all vehicles whether fully electric or ICE powered. Not only is it compact and light thereby not taking much room in the vehicle, but it also has an incredibly long shelf life, triple that of most other extinguishers, needs no servicing during its life and yet is certified for most types of fires.

In the case of more general vehicle fires, the Fire Safety Stick also has a key advantage of its fire extinguishing vapour reaching areas that more traditional extinguishers would struggle with, such as under the vehicle or remote places deep within the engine bay for an internal combustion engine.

Although not certified for lithium-ion battery fires, the Fire Safety Stick works by removing the oxygen around the flames thereby repressing the fire. However, due to the thermal runaway of the battery cells, it will not prevent further re-ignition of the batteries. Therefore, as stated before, once these battery cells are on fire, members of the public should not attempt to deal with this fire at all. It is imperative they escape to safety and leave it to the professionals. 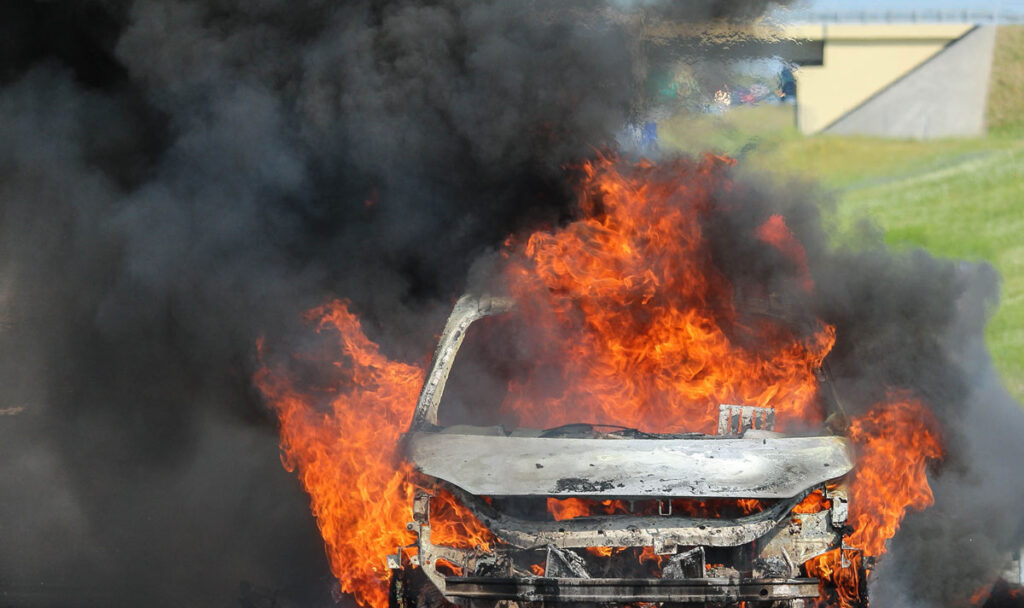 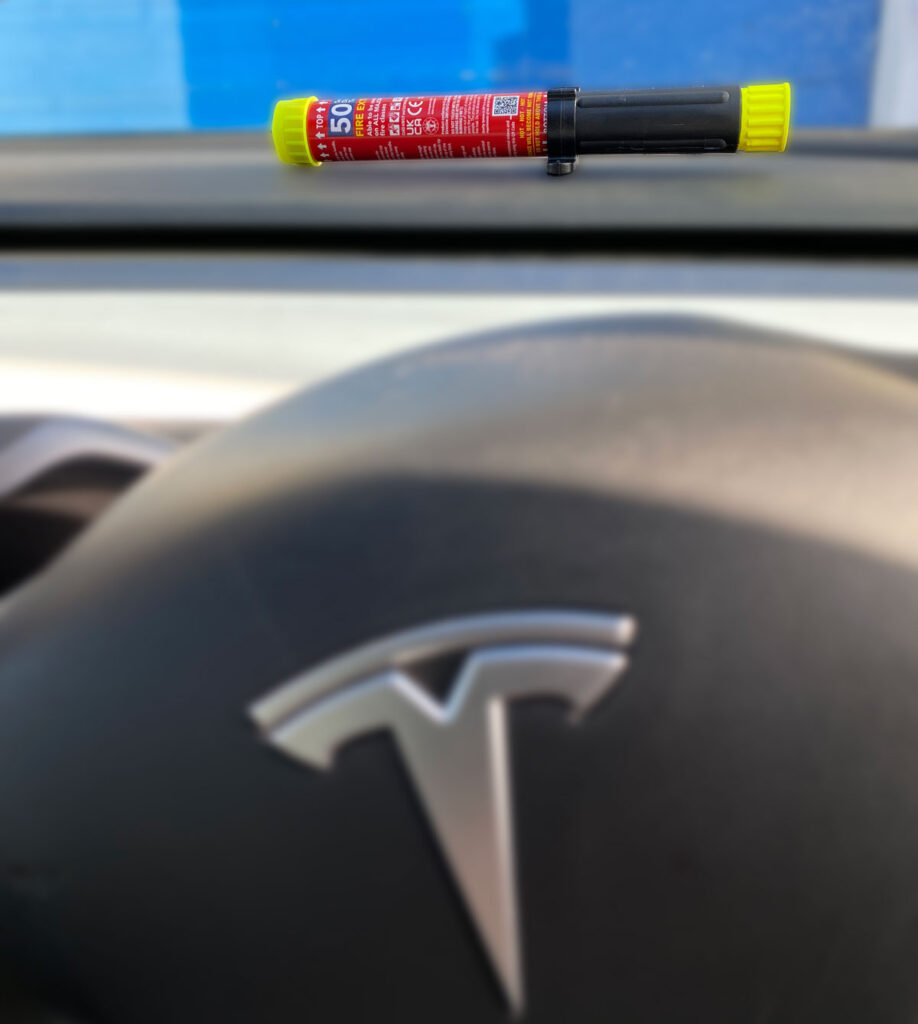