Fire Safety Stick – The kitchen utensil every home should have

Household fires – the advice is to get out and stay out. Now with the Fire Safety Stick, you can do that while it extinguishes a fire before it takes hold.

Earlier in the Summer, Richard Sails was in his kitchen with his wife when they fancied some bacon butties. So, they turned the grill on and popped the bacon under it. The next thing they saw were two-foot-high flames spouting from the back of the grill. He immediately switched off the grill, but the flames kept shooting out of the back of the cooker.

It would appear the air vent at the back was lined with grease and fat from many years of use, and this was now on fire. The flames from the fire continued with no sign of it easing. Richard’s initial reaction, like many, was to grab his fire blanket and attempt to smother the fire which he tried. However, it soon became apparent that the fire was still raging underneath as the flames and smoke began to escape from beneath it.

Fortunately, he had a Fire Safety Stick close by in his garage, so grabbed it, discarded the cap and activated it. Then safely, threw it under into the grill. Within just two to three seconds, the flames had stopped while he joined his wife out into the safety of the garden. During this time, the Fire Safety Stick continued to discharge, not just acting as the extinguisher to the fire but ongoing fire suppression ensuring that the fire could not re-ignite. 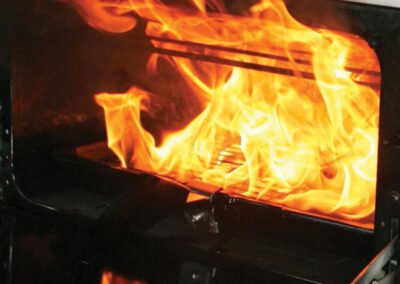 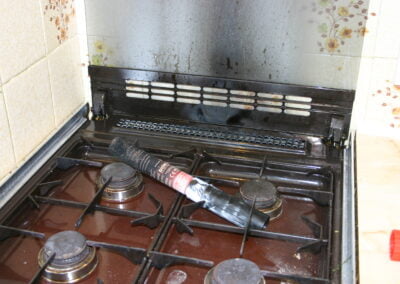 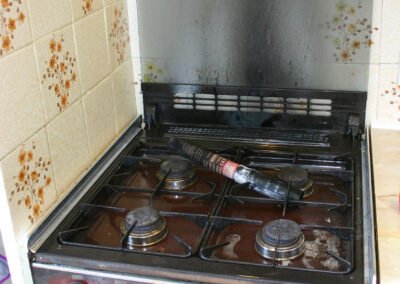 Indeed, a potentially terrifying experience for the Sails, it could have been much worse had they not have had the Fire Safety Stick. It certainly demonstrates how you can activate it and still follow the fire brigades safety advice of get out, stay out – during that time the FSS can extinguish that small household fire and suppress any re-ignition within an evacuated room. Therefore an initially small fire was prevented from becoming a much larger one with devastating effects.

Once it was deemed safe to go back in the kitchen, the white “smoke” or vapour that had discharged from the FSS was still present, but this is totally harmless, non-damaging and was soon vented out of the room. Once done so, it could be seen that the Fire Safety Stick left no damage or odour in the kitchen. There was only the mess around the cooker itself as a result of the flames. This was soon wiped down and back to normal.

Richard and his wife said they were planning on replacing the old cooker and refurbishing the kitchen since they had moved in a few years ago. Richard added they would certainly make sure they have a Fire Safety Stick mounted in its bracket under the kitchen sink. In fact, here at Fire Safety Stick HQ are proud to present Richard with a free replacement FSS for them.