Did you know that there are approximately 7,000 chimney fires each year in the UK and over 2,000 in Ireland.

As the weather turns colder, we all love the heat from an open fire or stove burner in the home. However, how many of us are prepared for a fire in the chimney itself? Would you be?

Fortunately, Anthony C. from Ireland was when it happened to him and his family. Having seen the effectiveness of the Fire Safety Stick during a video demonstration as an extinguisher for electricians as well as it’s all-round capabilities, he purchased his from his local stockist – EARS Motorsport in Ireland.

So, when a chimney fire started, he reached for a fire safety stick activated it and put it in place for the discharge from the extinguisher to go straight up into the flue and so quickly suppressed and extinguished the fire. It was this quick thinking which avoided a much larger and more dangerous fire taking hold in his home.

So, if you have an open fire or a cast-iron stove, burning coal or logs, make sure you have your Fire Safety Stick close by in the home ready, should you ever need it.

Anthony, having seen just how efficient the Fire Safety Stick was for himself, now has them around the home and in the car. It really is a no brainer!

The build-up of creosote often causes chimney fires within the flue by burning unseasoned logs which have not thoroughly dried out. Also, another cause can be debris built up within the chimney – typically leaves, small branches, possibly even from birds nesting during the summer months.

Of course, prevention is the best cure and ensuring that the chimney is regularly swept it crucial, for coal (or gas and oil) once to twice a year should be fine, but in the case of log fires then more often is necessary.

Should a fire start, you must always call the fire brigade immediately as your first action. Then, if it’s safe to do so, get your Fire Safety Stick, activate it and place it to the side of the fire. If it’s a stove, close the door. If it’s an open fire and you are able to do so, try to block it with a fire-proof board. But always remember about your own safety first. By using the Fire Safety Stick, it’s highly likely the fire will be out by the time the Fire brigade arrive, but it’s still important they do attend to ensure everything is safe.

Have you had to use a Fire Safety Stick in an emergency? If so, tell us about it email info@firesafetystick.com 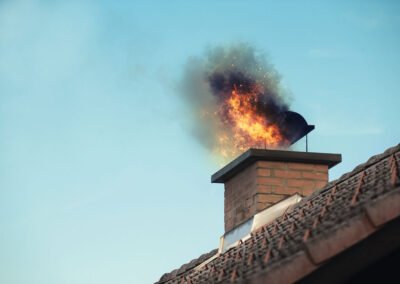 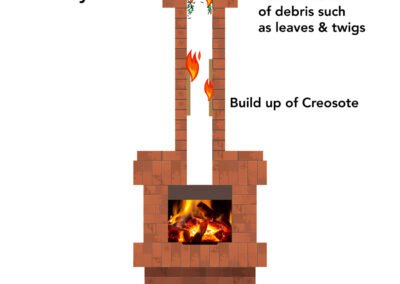 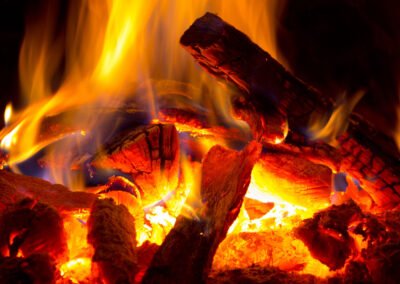